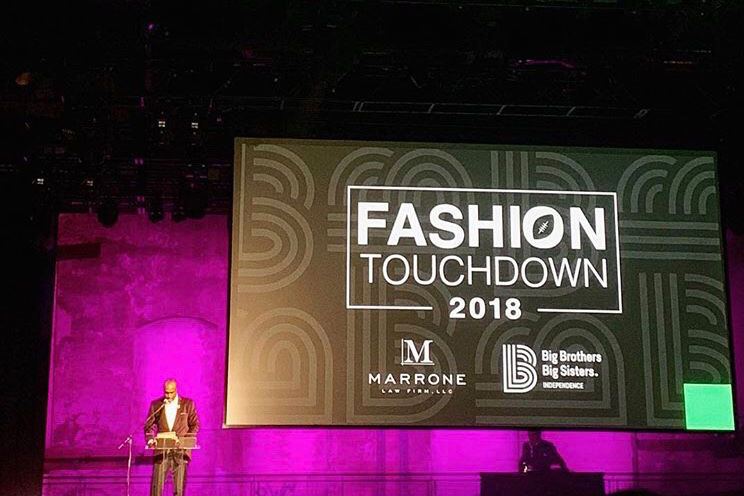 Philadelphia, PA (November 8, 2018) – Monday, November 5th, 2018, was a philanthropic night to remember as fashion and football came together for its annual star-studded charity event, Fashion Touchdown 2018, which took place at The Fillmore. The night began with a VIP preparty featuring cocktails and light bites. Fashion Touchdown now in its fifth year of success, entertained as members of the Philadelphia Eagles and their wives hit the runway to benefit Big Brothers Big Sisters Independence Region.

The event has raised $595K thus far with donations and more auction items in continuing to pour in, stay tuned. The highest grossing auction item was a dinner with Carson Wentz and his wife, Madison, at Del Frisco’s Double Eagle Steakhouse, along with a signed Carson Wentz jersey for $27K!

Nicole Miller, Chef Nick Elmi (Top Chef winner and Philadelphia Restauranteur) and Hall of Fame Boxing Champ, Bernard “The Alien” Hopkins also auctioned off tremendous experiences which in total brought in $48K. A custom suit by Damari Savile and lunch with Eagles safety, Malcolm Jenkins went for $12k. Each of the players walking in the show auctioned their jerseys and brought in very significant dollar amounts as well. All donations and monies raised will benefit Big Brothers Big Sisters financially while raising awareness about the organization and its impact on the community.

This year, Philadelphia Eagles team members represented the City of Brotherly Love, donning Damari Savile menswear, which is owned by Eagles safety, Malcolm Jenkins. The newly opened DAPR Grooming Parlour in Rittenhouse Square offered their talents to make sure the men’s hair shined as they strutted down the runway.

Designer Nicole Miller also showcased her women’s collection with a runway show that featured the wives of the members of the Philadelphia Eagles. “Mentorship is the gateway to success and we are proud to be part of the Fashion Touchdown,” said Mary Dougherty, owner of two Nicole Miller stores within Philadelphia.

Before the women took to the runway, their hair and makeup were taken care of by the international beauty brand and innovator, Anastasia of Beverly Hills and the Jason Matthew Salon of Philadelphia.

“For five years, the event shows not only the love that Philly feels for our community, but also the unwavering work that BBBS does on a daily basis for more than 3,500 children in our region,” said Joseph M. Marrone, Esq, Founder of Marrone Law Firm, LLC. “It’s a testament to the belief that sponsors have in the event because there is much more to do, over 1,500 kids sit in the waiting pool for a ‘Big’.” Marrone served as a Big Brother and is currently on the Governing Board of BBBS Independence Region.

Renowned Philadelphia celebrity pop artist, Perry Milou was also in attendance. He designed a custom piece for auction and a special centerpiece of the new Big Brothers Big Sisters logo for the stage in collaboration with Rodney McLeod, Chris Maragos, Bernard Hopkins and kids who are part of the “Littles” program through Big Brothers Big Sisters.

Other sponsors included Live Nation, Bank of America, Mutual of America, and AmerisourceBergen. The food and beverage sponsors included Brûlée Catering, Casamigos Tequila, Tito’s, Stateside Vodka, and Yards Brewery. The event showcased not only BBBS, but also the brotherly love that Philly is known for.

Big Brothers Big Sisters Independence Region is a donor-supported organization that enriches, encourages, and empowers children to reach their highest potential through safe, one-to-one mentoring relationships. Volunteering as a Big Brother or Big Sister is about making a measurable difference in a child’s life by sharing new perspectives and experiences. Serving Chester, Delaware, Montgomery, and Philadelphia Counties in PA and Burlington, Camden and Gloucester Counties in NJ, nearly 4,000 children annually are more successful socially and academically because of the work of Big Brothers Big Sisters Independence Region. Visit us at www.independencebigs.org.

Mary K. Dougherty privately owns and operates two renowned fashion landmarks in the city of brotherly love and sisterly affection. In 1994, Dougherty opened her first Nicole Miller boutique in Manayunk, and shortly after a second location followed in the heart of center city at The Bellevue. Dougherty and her team of stylists are revered in the Philadelphia community for their constantly innovative, thoughtful, professional and fresh approach to fashion, style and philanthropy. For more information on Nicole Miller Philadelphia boutiques, please visit nicolemillerphiladelphia.com or call 215-930-0307.

Known for her signature graphic prints and innovative silhouettes, Nicole Miller is an iconic American designer with a modern, ageless aesthetic. With a degree in fine arts from The Rhode Island School of Design and a degree from l’Ecole de la Chambre Syndicale de la Haute Couture Parisienne in Paris, Nicole Miller combines her art training with couture technique. Nicole Miller’s creations have garnered a loyal following of celebrity fans including Angelina Jolie, Beyoncé, Kelsea Ballerini, Perrey Reeves, Cheryl Hines, and Jackie Cruz, amongst others. Nicole is a CFDA board member, and has been the recipient of numerous industry awards such as the Legend of Fashion Award (2006), Fashion Group International Lifetime Achievement Award (2012), and the Visionary Woman Award (2014).