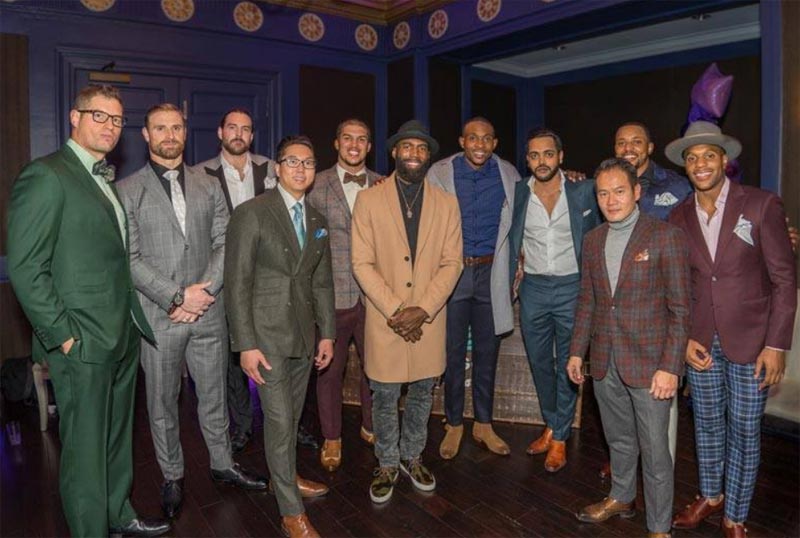 PHILADELPHIA, PA (Oct. 30, 2018) – Philly’s annual star-studded charity event, Fashion Touchdown 2018, will take place on Nov. 5, 2018, at The Fillmore from 5:30 pm to 9:30 pm EST.  Marrone Law Firm, LLC is repeating its success as the presenting sponsor and has secured many from the city of brotherly love to continue their participation. The goal for this year’s event is $1 million, with all proceeds going to Big Brothers Big Sisters Independence Region (BBBS).

What has become one of the town’s biggest fundraisers, the event will feature members of the Super-Bowl winning team, the Philadelphia Eagles, once again lending their support by donning bespoke men’s fashions from Eagles safety Malcolm Jenkins’ Damari Savile line and walking down the runway in style. ToBox Shoes will provide the men’s footwear.

Nicole Miller Philadelphia will showcase their Fall 2018 line by dressing the women for the show, with Nicole Miller herself in attendance to curate along with her team. Both Nicole Miller and ToBox are returning fashion runway sponsors.

“For five years, the event shows not only the love that Philly feels for our community but also the unwavering work that BBBS does on a daily basis for more than 3,500 children at risk,” said Joseph M. Marrone, Esq, Founding Partner of Marrone Law Firm, LLC. “It’s a testament to the belief that sponsors have in the event as many, from the Eagles to Nicole Miller and ToBox Shoes returning as participants and sponsors. Giving back to the community is what it’s all about.”

Marrone knows this first-hand. He has been a Big Brother himself and is currently on the Governing Board of BBBS Independence Region.

Joining this year as main sponsors include Live Nation, Bank of America, Merrill Lynch, and AmerisourceBergen. Returning food and beverage sponsors include Philly’s own Brulee Catering, Casamigos Tequila, Stateside Vodka, and Yards Brewery. Beauty partners include Philly’s Jason Matthew Salon who will once again provide hair styling for the women and Anastasia Beverly Hills who will coordinate the female models’ makeup.

“It’s true teamwork all the way around, from the players to the fashion runway and local food and beverage sponsors,” said Marrone. “We’re showcasing Philly at its best and we couldn’t be more proud of the impact that BBBS is having in our community.”
noopener nofollow
Head towards the in zone and purchase tickets for the event at Eventbrite before it’s too late, as the event has sold out in previous years. Plus, check out Marrone Law Firm on social media for ongoing announcements and giveaways.

Big Brothers Big Sisters Independence Region is a donor-supported organization that enriches, encourages, and empowers children to reach their highest potential through safe, one-to-one mentoring relationships. Volunteering as a Big Brother or Big Sister is about making a measurable difference in a child’s life by sharing new perspectives and experiences. Serving Chester, Delaware, Montgomery, and Philadelphia Counties in PA and Burlington, Camden and Gloucester Counties in NJ, nearly 4,000 children annually are more successful socially and academically because of the work of Big Brothers Big Sisters Independence Region. Visit us at www.independencebigs.org.

Mary K. Dougherty privately owns and operates two renowned fashion landmarks in the city of brotherly love and sisterly affection. In 1994, Dougherty opened her first Nicole Miller boutique in Manayunk, and shortly after a second location followed in the heart of center city at The Bellevue. Dougherty and her team of stylists are revered in the Philadelphia community for their constantly innovative, thoughtful, professional and fresh approach to fashion, style and philanthropy. For more information on Nicole Miller Philadelphia boutiques, please visit nicolemillerphiladelphia.com or call 215-930-0307.
Media Contact:
Mary K Dougherty
Nicole Miller Philadelphia
mdougherty@nicolemillerphiladelphia.com
610-212-7770

Known for her signature graphic prints and innovative silhouettes, Nicole Miller is an iconic American designer with a modern, ageless aesthetic. With a degree in fine arts from The Rhode Island School of Design and a degree from l’Ecole de la Chambre Syndicale de la Haute Couture Parisienne in Paris, Nicole Miller combines her art training with couture technique. Nicole Miller’s creations have garnered a loyal following of celebrity fans including Angelina Jolie, Beyoncé, Kelsea Ballerini, Perrey Reeves, Cheryl Hines, and Jackie Cruz, amongst others.  Nicole is a CFDA board member, and has been the recipient of numerous industry awards such as the Legend of Fashion Award (2006), Fashion Group International Lifetime Achievement Award (2012), and the Visionary Woman Award (2014).